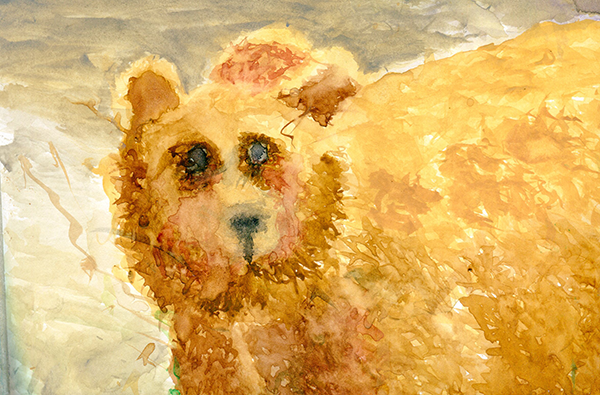 I wanted to paint an animal that spoke to me of strength. I immediately thought of bears, partly because of the “mama bear coming to the defense of her cub” stereotype. I was particularly attracted by the strong arms and shoulder of this image.

I used light brown to block in the shape of the bear and switched to gray to put in rocky background. I spent a couple painting sessions using short strokes to indicate fur. I tried to use the color of the brushstroke to show volume. (Somewhere along the way, I wondered if it would’ve been useful to paint a naked bear and then add fur to it.)

I realized that I didn’t capture the turn of the bear’s head in the photo, so I spent a painting session concentrating on the head and face. At first, I left the eyes blank and try to go in with black as my last move. I wanted the eyes do have some life in them. The photo does not include any catch lights. The eyes in the photo are unseen. I ended up with a rather wistful looking bear.