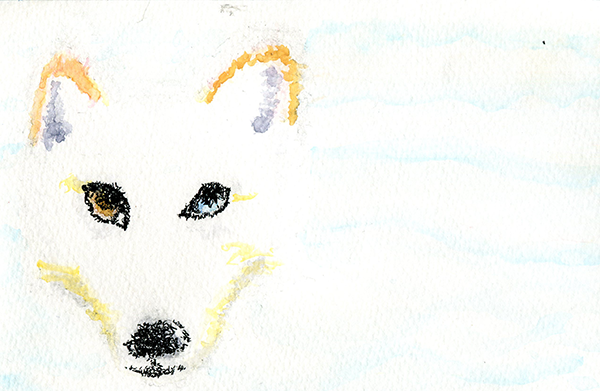 My promise this January is “to forgive with wild abandon.” Both forgiveness and the beginning of the year make me think of big changes.  Since I wanted to draw an animal, I googled and found a list of Top 10 Animal Transformers. It was a fun list to consider. Many of the animals on it are not ones whose form we recognize. I decided I wanted to draw an Arctic Fox, though I recognized that one of my challenges was going to be to draw/paint a white animal using watercolor paints. (That means the paper surface contributes the white; you can’t layer white pigment over color as you can with acrylic or oil paints.)

I suspect that my favorite image of the Fox is an illustration, rather than a photo. I found it on a guide to Iceland. Nevertheless, I set forth…

it took me a couple of fresh starts to get a sketch that satisfied me. In order to erase the sides of the face and know where I was, I added blue paint. My judging mind was not happy with this choice, but it seemed the only way to continue. I painted a little bit of yellow, reaching for contours, and then was sorry I did.I was happier when I put some blue paint in those areas, though I note that the blue did not show on the scan.
The yellow works after all. Those initial judgments are so often unnecessarily critical!

The eyes are the most arresting feature of the reference image. I painted the gold and blue irises and then added watercolor pencil to make the colors stronger. I wanted to use marker to make a strong line around the eye, but putting the marker in my mouth was scary. I was so sure that I would make a mistake and get black somewhere I didn’t want it to go. I was careful and made no big mistakes, but making symmetrical eyes was a challenge.

The scan washes out the blue a bit, but decreasing the brightness made the image look grubby. Better to leave things as scanned.

I thought doing a face portrait would use the small space available better, but drawing more of the animal would have made it “read” more easily.

I want to choose my reference photos more carefully. The style I’m after requires many subjects within the frame, not just a few. I like the idea of animal portraits, but the background needs to be a little complicated.

In order to get better at drawing something, I’m wondering if I need to repeat it. I’m flirting with the idea of trying one subject for several months so I can improve my skills. The question is: would it serve its purpose in the newsletter?